Correctly redirecting your URLs is one of the most important things you can do to make a site migration go smoothly, but there are clear processes to follow if you want to get it right. Here we break down the rules to successful migration of a Wordpress site. 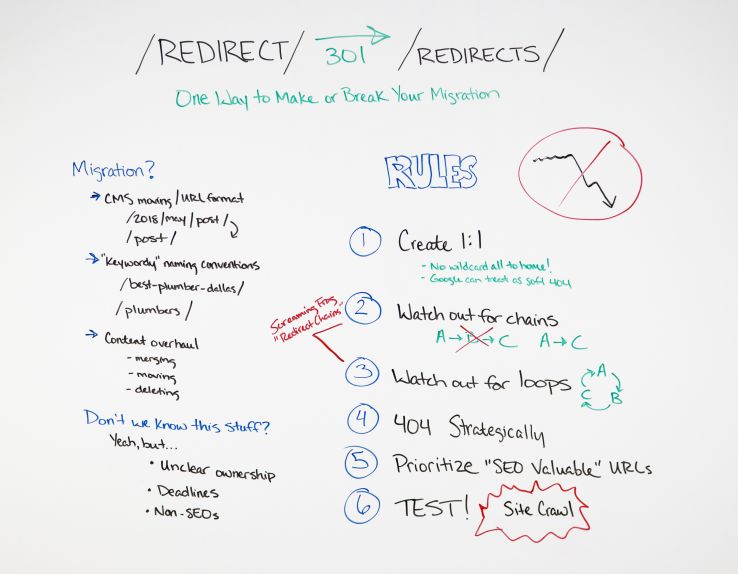 Redirects are one way that can make or break your site migration. Site migration can mean a lot of different things depending on your context.

Talking about migration, I’m coming from the experience of these primary activities.

One example of a migration might be taking on a client and they previously used a CMS that had a default kind of URL formatting, and it was dated something.

Another instance is that sometimes a client will come to us with dated or keywordy URLs, and we want to change this to be a lot cleaner, shorten them where possible, just make them more human-readable.

An example of that would be the client used URLs like /best-plumber-dallas, and we want to change it to something a little bit cleaner, more natural, and not as keywordy, to just /plumbers or something like that. So that can be another example of lots of URLs moving around if we’re taking over a whole site and we’re kind of wanting to do away with those.

Another example is if we’re doing a complete content overhaul. Maybe the client comes to us and they say, “We’ve been writing content and blogging for a really long time, and we’re not seeing the traffic and the rankings that we want. Can you do a thorough audit of all of our content?” Usually what we notice is that you have maybe even thousands of pages, but only four of them are ranking.

So there are a lot of just redundant pages, pages that are thin and would be stronger together, some pages that just don’t really serve a purpose and we want to just let die. So that’s another example where we would be merging URLs, moving pages around, just letting some drop completely. That’s another example of migrating things around that I’m referring to.

We already know all this? but..

Generally, SEO people know or should know the importance of redirection. If there’s not a redirect, there’s no path to follow to tell the search engine where you’ve moved your page to.

It’s frustrating for users if they click on a link that no longer works, that doesn’t take them to the proper destination, and its a bad user experience. We know it’s important, and we know what it does. It passes link equity. It makes sure people aren’t frustrated. It helps to get the correct page indexed. If you’re like me, you’ve also been in those situations where you have to spend entire days fixing 404s to correct traffic loss or whatever after a migration, or you’re fixing 301s that were maybe done but they were sent to all kinds of weird places.

Mistakes still happen though, even though we know the importance of redirects.

Unclear ownership is something that can happen, especially if you’re on a scrappier team, a smaller team and maybe you don’t handle these things very often enough to have a defined process for this. I’ve been in situations where I assumed the tech was going to do it, and the tech assumed that the project assistant was going to do it.

We’re all kind of pointing fingers at each other with no clear ownership, and then the ball gets dropped because no one really knows whose responsibility it is. So don’t drop the ball, just make sure that you designate someone to do it and that they know and you know that that person is going to be handling it.

Another thing is deadlines. Internal and external deadlines can affect this. So one example that encountered pretty often is the client would say, “We really need this project done by next Monday because we’re launching another initiative. We’re doing a TV commercial, and our domain is going to be listed on the TV commercial. So I’d really like this stuff wrapped up when those commercials go live.”

So those kind of external deadlines can affect how quickly we have to work. A lot of times it just gets left off because it is not a very visible thing. If you don’t know the importance of redirects, you might handle things like content and making sure the buttons all work and the template looks nice and things like that, the visible things. Where people assume that redirects, oh, that’s just a backend thing. We can take care of it later. Unfortunately, redirects usually fall into that category if the person doing it doesn’t really know the importance of it.

Then another situation that can cause site migration errors and 404s after moving around is non-SEOs handling this. Now you don’t have to be a really experienced SEO usually to handle these types of things. It depends on your CMS and how complicated is the way that you’re implementing your redirects. But sometimes if it’s easy, if your CMS makes redirection easy, it can be treated as like a data entry-type of job, and it can be delegated to someone who maybe doesn’t know the importance of doing all of them or formatting them properly or directing them to the places that they’re supposed to go.

The rules of redirection for site migrations

Now that we kind of know what I’m talking about with migrations and why they kind of sometimes still happen, I’m going to launch into some rules that will hopefully help prevent site migration errors because of failed redirects.

Number one, always create one-to-one redirects. This is super important. What I’ve seen sometimes is it could save me tons of time if I just use a wildcard and redirect all of these pages to the homepage or to the blog homepage or something like that. But what that tells Google is that Page A has moved to Page B, whereas that’s not the case. You’re not moving all of these pages to the homepage. They haven’t actually moved there. So it’s an irrelevant redirect, and Google has even said, I think, that they treat those essentially as a soft 404. They don’t even count. So make sure you don’t do that. Make sure you’re always linking URL to its new location, one-to-one every single time for every URL that’s moving.

Watch out for redirect chains

Two, watch out for chains. I think Google says something oddly specific, like watch out for redirect chains, three, no more than five. Just try to limit it as much as possible. By chains, I mean you have URL A, and then you redirect it to B, and then later you decide to move it to a third location. Instead of doing this and going through a middleman, A to B to C, shorten it if you can. Go straight from the source to the destination, A to C.

Watch out for loops

Three, watch out for loops. Similarly what can happen is you redirect position A to URL B to another version C and then back to A. What happens is it’s chasing its tail. It will never resolve, so you’re redirecting it in a loop. So watch out for things like that. One way to check those things I think is a nifty tool, Screaming Frog has a redirect chains report. So you can see if you’re kind of encountering any of those issues after you’ve implemented your redirects.

Number four, 404 strategically. The presence of 404s on your site alone, that is not going to hurt your site’s rankings. It is letting pages die that were ranking and bringing your site traffic that is going to cause issues. Obviously, if a page is 404ing, eventually Google is going to take that out of the index if you don’t redirect it to its new location. If that page was ranking really well, if it was bringing your site traffic, you’re going to lose the benefits of it. If it had links to it, you’re going to lose the benefits of that backlink if it dies.

So if you’re going to 404, just do it strategically. You can let pages die. Like in these situations, maybe you’re just outright deleting a page and it has no new location, nothing relevant to redirect it to. That’s okay. Just know that you’re going to lose any of the benefits that URL was bringing your site.

Number five, prioritize “SEO valuable” URLs, and I do that because I prefer to obviously redirect everything that you’re moving, everything that’s legitimately moving.

But because of situations like deadlines and things like that, when we’re down to the wire, I think it’s really important to at least have started out with your most important URLs. So those are URLs that are ranking really well, giving you a lot of good traffic, URLs that you’ve earned links to. So those really SEO valuable URLs, if you have a deadline and you don’t get to finish all of your redirects before this project goes live, at least you have those most critical, most important URLs handled first.

Again, obviously, it’s not ideal, I don’t think in my mind, to save any until after the launch. Obviously, I think it’s best to have them all set up by the time it goes live. But if that’s not the case and you’re getting rushed and you have to launch, at least you will have handled the most important URLs for SEO value.

Number six, just to end it off, test. I think it’s super important just to monitor these things, because you could think that you have set these all up right, but maybe there were some formatting errors, or maybe you mistakenly redirected something to the wrong place. It is super important just to test. So what you can do, you can do a site:domain.com and just start clicking on all the results that come up and see if any are redirecting to the wrong place, maybe they’re 404ing.

Just checking all of those indexed URLs to make sure that they’re going to a proper new destination.

You should be using SEMRush for analysis, and there is an article here, which gives you more details on this.

But it can also scan your site for errors like 404s namely. So if there are any issues like that, 500 or 400 type errors, SEMRush will catch them and notify you, you can also run other tools in there like the backlinks tool etc to check any of those.

There are plenty of other ways you can test and find errors. But the most important thing to remember is just to do it, just to test and make sure that even once you’ve implemented these things, that you’re checking and making sure that there are no issues after a launch. I would check right after a launch and then a couple of days later, and then just tweak things until you are happy with it.

So now you can do redirects properly! Here’s another link for SEMRush, go get yourself a free copy!

If you enjoyed this post, why not check out this article on Mapping SERPS Overlays!